Following on from my post last week, this is my 2nd blog from my placement at the Natural History Museum.

So, following lunch on the Wednesday afternoon myself, Lukas & Glenn were introduced to Curator of Flowering plants, Ranee Prakash who gave us a quick tour of her office space and a brief overview of some of her duties. We were then shown some of the collections before being given a couple of tasks to undertake with the collection. The first of these tasks involved working through a pile of herbarium sheets which needed to be sorted. This was done by using an index of plant names, and labelling them with the corresponding genus number, making it easier for Ranee to sort these into the collection at a later date. 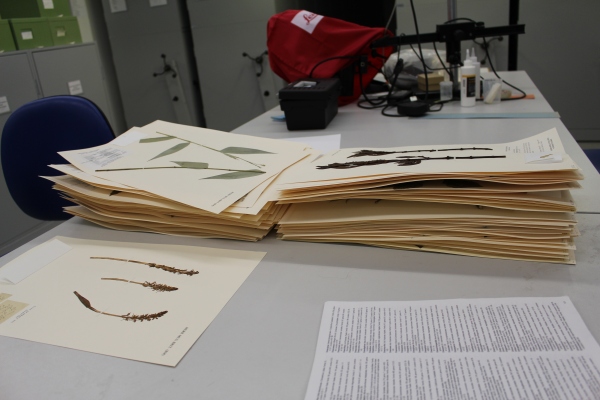 We were then given the opportunity to see how the NHM is digitising herbarium sheets which have been pressed & mounted. This is done using an inverted flatbed scanner, specially mounted for this purpose, and scanning the sheet to create a digital image. The image is then linked to the corresponding database record.

Thursday, we spent the day in the entomology department with Daniel Whitmore, Curator of Diptera, Duncan Sivell, another Curator of Diptera, and Ben Price, Curator of Odonata & Small Orders. The day started with a tour of the collections, aswell as being told about the ongoing task of re-curating the collections. Something which is an ongoing task involving moving specimens into newer, acid free & modular trays to improve storage and access.

We were also shown 2 different methods of digitising the entomology collections. The first of these was shown to us by Ben. It involved a digital camera mounted to a frame which is controlled and moved by computer software. The camera is set then moved across the length and width of a drawer full of specimens, taking multiple high resolution images. The images are then stitched together to create one image of the complete drawer. The software is still being tweaked, but is able to identify individual specimens already, which can then be linked to their database records.

The 2nd digitisation method which is being used was then shown to us by Dan. This technology consists of a high resolution camera attached to a high magnification microscope. The software in use with this then allows a low & high focal point to be set on the specimen (i.e. the lowest point of a fly wing to the highest point of another wing). The software then takes multiple images at different focal points, eventually stitching these together to produce a highly detailed image which can be used to send digital loans.

We were then given some hands on work to do. The first of these was learning how to pin insects, something which I’d never done before, but always wanted to do. These were insects which had been caught the previous day from the Museums own Wildlife garden. 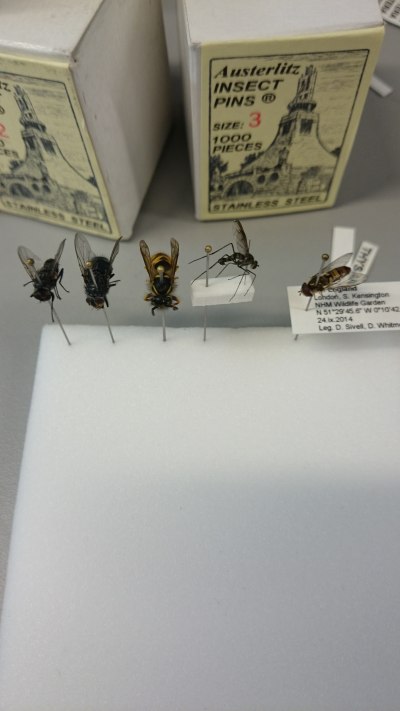 Our second practical task was to sort through material that had been collected in a Malaise Trap. Using a microscope and tweezers we were able to pick out individual specimens and attempt to arrange them into their correct families.

The rest of the afternoon then consisted of us heading into the wildlife garden ourselves, along with Dan, who demonstrated the best way to use a net (however simple that sounds) and the best techniques to use for different types of insects. I also got to experience using ethyl acetate to kill an insect. This is used so that specimens to be added to a collection remain undamaged.

On Friday, the last day of our placement, we met David Smith a Curator in the Earth Sciences department, specialising in the Rock collection. David gave us a great (but short, as we only had the morning) tour of some of the collection, aswell as letting us know how curating his collection is completely different to curating other materials and specimens. For example, a Rock collection wouldn’t be damaged by pests like a Botanical collection could potentially be.

He also explained how his collection differs in the way it is stored, with material mainly stored by collection date. This keeps all material from a particular expedition, or collection event together, retaining the context of the collected materials. For example, the drawer below is a drawer of material collected on the Scott expedition to Antarctica. 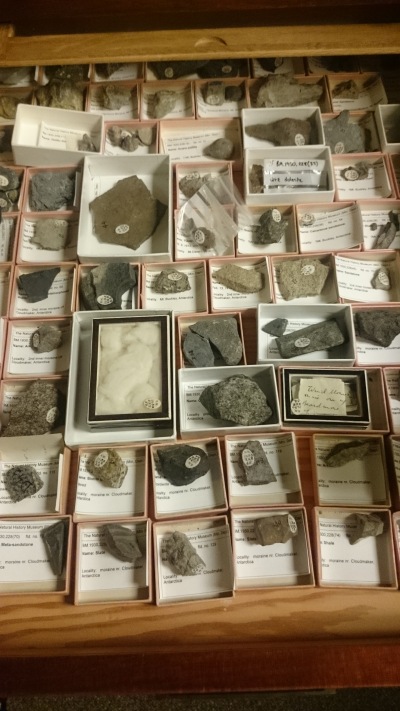 After spending the morning with David, that was the end of our placement, and the rest of the afternoon was spent with more time on the galleries, where we finally got chance to view the ‘Humans in Britain’ temporary exhibit, very impressive in itself, especially for a temporary exhibit, before having to get a train back to Manchester.

I had a fantastic time at the NHM, and would again like to take the chance to thank everyone there who took time to look after 3 trainees!

Now the hard thing is deciding which department I’d like to go back to later in the traineeship!